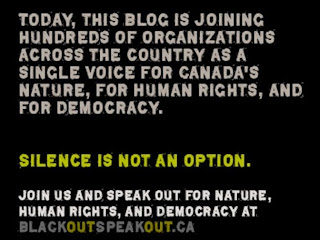 Wasn't That A Party?

As I was watching the results of the Alberta election last night, one thing kept going through my head. The Alberta political alignment is a much more honest representation of the national political alignment until 2011. A right wing party and a centre right party fighting it out for power, only instead of Conservative and Liberals it was Wild Rose and Progressive Conservatives. I am relieved in a sense, because Alberta revealed itself as just another part of the country and not some odd foreign entity. The breakdown of the vote also was interesting because it showed that even in Alberta, the ultra right can't yet breach the 40% ceiling. Now, given our totally screwed up electoral system, that may be enough for the rightists to take power there some day, but again, Alberta is no different than the rest of the country. Recommend this Post
Posted by Greg at Tuesday, April 24, 2012 17 comments

Living the Vida One Percent

The PM dropped $45,000.00 on a trip to New York on Labor Day. The PMO thinks it's cool to justify it by saying he reimbursed the treasury. But is it really? Do you have 45k to drop on a weekend trip to New York? The PM is paid well, but 45k on a weekend to New York well? If he does have that kind of discretionary cash on hand, it is no wonder he is out of touch with the realities facing the rest of us. If he had help from friends to raise the cash necessary for the trip, I think we deserve to know who they were and what they expect in return.

Update:Ok, now I see. Harper reimbursed the treasury only for commercial airfare to New York and you and I get to pick up the rest of the tab. It must be nice being the king.

Update 2: Even dropping 11k plus commercial airfare for one weekend is out of reach of most of us. It gives us more perspective on Harper's 1 billion dollar G8 weekend, doesn't it?
Update 3: Justin Trudeau calls the story "garbage" on Twitter, but he is of course an entitled one percenter himself. Born and raised. Recommend this Post
Posted by Greg at Saturday, April 14, 2012 9 comments

Email ThisBlogThis!Share to TwitterShare to FacebookShare to Pinterest
Labels: All Hail King Stephen, Living The Vida One Percent

Basta! Ok, I get it. Vimy was an important event in Canadian history. But, it wasn't the only one. Canada has other events to think about and share, this month. I am not so much concerned by the commemoration of Vimy, but in the way our federal government has turned our history into nothing more than war porn. It is presenting our complex history as nothing more than a series of old battles and wars fought in far off places. It is shortchanging Canadians by narrowing the historical narrative to one note and robbing them of understanding how interesting our history really is. Recommend this Post
Posted by Greg at Monday, April 09, 2012 6 comments

What would we do without Rob Anders? Or, as he is referred to in this article, "Old Snoozy". I wonder if on top of being tired, he was emotional too? Recommend this Post
Posted by Greg at Thursday, March 01, 2012 3 comments

Email ThisBlogThis!Share to TwitterShare to FacebookShare to Pinterest
Labels: Support The Troops

Lest we get swept up in the Conservative narrative that this is a fiction, cooked up in the last week by the opposition. I take you back to election day, May 2, 2011. Note in particular, the first paragraph. Recommend this Post
Posted by Greg at Thursday, March 01, 2012 6 comments

Email ThisBlogThis!Share to TwitterShare to FacebookShare to Pinterest
Labels: Robocalls

In Fairness, This Is Nonsense

I have to say that I find the following paragraph highly offensive:

Also in fairness, the reluctance of the Tories to endorse a wide-ranging inquiry might simply be evidence of a lesson well-learned from watching the results of the Liberals' Gomery inquiry into the sponsorship scandal.

Why is it fair for the Tories to rule out an inquiry because the one the Liberals called, sunk the Liberal government? That is, not to put too fine a point on it, illogical. Think about it for a second. If the Conservatives were the virgins they are claiming to be, they would be grasping onto the idea of an inquiry with both hands. That way, when they were found to be completely blameless, they could use that fact to bludgeon the opposition to death. They have every reason to be afraid of an independent judicial inquiry, but fairness has nothing to do with it. Recommend this Post
Posted by Greg at Thursday, March 01, 2012 21 comments

The Globe and Mail - Politics News